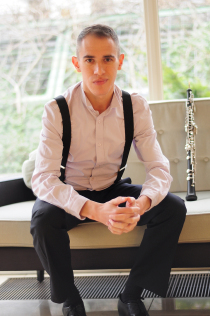 Juilliard-trained oboist Demetrios Karamintzas is equally at home in his native New York, his adopted home of Jerusalem, or his new home of Berlin. His first studies were at the New England Conservatory of Music, in Boston, and Louisiana State University, in Baton Rouge, where he graduated magna cum laude. Immediately after receiving his Masters degree from The Juilliard School in 2004, he began as principal oboist of the Jerusalem Symphony Orchestra, where he remained for seven years. In contrast to his Israeli teaching and performing career, Karamintzas was very active with the Barenboim-Said Foundation and Al Kamandjati music schools in Ramallah, and helped to build the first Palestinian youth orchestra. In 2015, his interest in intercultural communication and development led to a collaboration with the Afghanistan National Institute of Music, in Kabul, as well as a collaboration with the Nour Project, with whom he performed in Alexandria and Cairo, Egypt.

After moving to Berlin in 2011, Karamintzas changed his focus to solo and chamber music. In November 2012 he founded a duo with the Bulgarian pianist Galya Kolarova, with whom he has already performed in Germany, Denmark, Switzerland, Israel and Bulgaria, and has recorded on the Claudio Contemporary label. They have been praised by critics not only for the "expressive and energetic tone" and "empathetic interpretation" of Karamintzas, or for Kolarova's  "delicate and graceful sounds"(Bornholms Tidende, 21.8.2013), but also for how "they gave themselves up to the music with a natural empathy and commitment to a degree that rubbed off on the audience." (Dagbladet Ringsted, 7.2015)

They were the winners of MODO's concert proposal competition in Bulgaria, leading to concert debuts in Sofia, Bulgaria, and their recent Tel Aviv recital debut was broadcast on Israeli National Radio. This ambitious duo has premiered new works specially written for them by Giuseppe Lupis (Italy/USA) and Timothy Baxter (England/Denmark), among others.

Mr. Karamintzas was featured as soloist with the Jerusalem Symphony Orchestra very frequently, with works ranging from the Baroque to the 20th century. Many other orchestras invited him as guest principal oboist, such as the Hannover State Opera Orchestra, Hamburg Symphony Orchestra, Israel Philharmonic and the Royal Scottish National Orchestra, with whom he performed in the Edinburgh International Festival. He has also performed at many other festivals, such as the Sorø International Music Festival, Suså Festival, Vendsyssel Festival, Bornholm's Internationaler Musiksommer (Denmark), the Musikfest Schloss Wonfurt, and the 30TageKunst Festival (Berlin) Festival dei due Mondi (Italy) the Israel Festival, the Eilat International Chamber Music Festival (Israel), and the Tanglewood Music Center (USA), where he was awarded the Ralph Gomberg Prize for Oboe.

In addition to playing concerts and teaching, Karamintzas also founded the concert series in Berlin, Klassik in Moabit, where he also serves as artistic director.  He also enjoys playing jazz, oriental and yiddish music with many artists, including Pascal von Wroblewsky, Anna Margolina, the Nour Project and many others.